70 years for the sake of health

Oriola celebrates its 70th anniversary this year in Finland. The company's story began in 1948, when Professor Erkki Leikola, Orion Ltd CEO, Sauli Sipilä, Master of Laws and Secretary of Orion's Board of Directors and Arvo Ylppö, Professor, Archiater, signed the company's founding documents in October. Oriola was entrusted with the task of importing and distributing medicines and sanitary wares for the post-war period of reconstruction in Finland. Special emphasis was placed on products and specialty products that were considered essential for the development of health care in the country. The first medicine imported and distributed by Oriola was Novo Therapeutic Laboratorio's insulin.

Medicines for the whole population

A few years after establishing the company, in 1951, Oriola launched wholesale operations and started importing penicillin from Novo Therapeutic Laboratories as well as pharmaceutical raw materials for the pharmaceutical industry. During the same autumn, Oriola acquired a surplus of battlefield medicines (reserved for II World War needs) from Suomen Huolto. This enabled Oriola to serve the needs of the pharmacies and hospital pharmacy customers in Finland.

Oriola’s customer list from year 1956 shows the long cooperation with both Finnish and international pharma companies; May & Baker, Roche, Sandoz, Bayer, C.H. Boehringer Sohn, Novo Medix, Astra Pharmacia, Organon, U.B.C., Lederle, Pfizer, Upjohn and Koponen and Leiras. Some of the companies still exist and the cooperation continues in Finland and in Sweden.

Support for medical care during the urbanisation

By the end of the decade, in 1960, the pharmaceuticals were freed from customs duties and the number of Oriola's foreign pharmaceutical company customers increased. Following this growth, Oriola strengthened its local network to support urbanizing Finland. The new offices ensured that drugs were distributed quickly enough throughout Finland. The task was facilitated by an own fleet of Oriola vans that started operating in 1967.

Growth also brought challenges to Oriola. The premises in the Vallila district in Helsinki were small and moving operations became necessary. New premises were found in Mankkaa, Espoo, where Oriola settled in 1968. The move also supported the development of logistics. As international pharmacy customers shifted to the single wholesale channel in 1971 in Finland, a positive challenge emerged to improve services that would meet customer needs even better. Efficiency was boosted by introducing the latest Nokia technology for subscription, billing, and accounting.

In the 1980s, a health food boom was seen in Finland. Oriola grasped this business opportunity and acquired Reformi Keskus, a market leader in health foods in Finland that time. This significantly strengthened co-operation with the retail sector.  PanSuola, a unique mineral salt, which is still one of the success products of Oriola's own product range, origins from this era.

Oriola became an international expert service organisation in the 1990’s when cooperation with international and local customers continued and subsidiaries were established. After the millennium, in 2006, Oriola demerged from Orion and was listed on the stock exchange.
Already year 2003 had been a very important milestone for Oriola when the company had bought Kronans Droghandel’s wholesale business covering whole Sweden. Until 2017 the name of the company was known as Oriola-KD. In 2010 the pharmacy market change in Sweden enabled Oriola-KD to start its own pharmacy business. Oriola bought Medstop pharmacies in 2013 thus becoming the third largest pharmacy chain, Kronans Apotek, in Sweden. To support its pharmacy services and safety in medical treatment, Oriola started also dose dispensing services in Sweden in 2015 and a year after in Finland.

A passionate builder of health and well-being

Oriola has been involved in building a high-quality healthcare system in Finland for 70 years. Safe medicines delivery has remained our core task over the decades, but today we also offer the widest range of expert services in the industry and help welfare and healthcare professionals to succeed in Finland and Sweden. Today, Oriola is an organisation of 2,600 experts.

The healthcare is changing rapidly and it is becoming more digitalised, more individualised and more preventive. At Oriola, we are inspired about the opportunities the changing environment and the development enables. Our passion, to support health and wellbeing is shared among our committed employees. Together with our customers we build healthy future – every day. 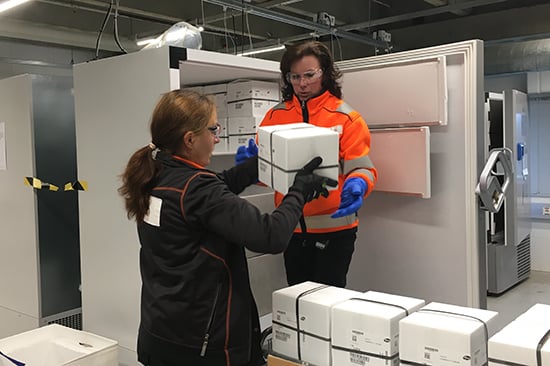